Industry wanting to be part of the proposed 2,000MW North Queensland Clean Energy Hub are encouraged to take part in the Expression of Interest (EOI) process before it closes on Friday 8 September.

Treasurer and Acting Minister for Energy Curtis Pitt said the Palaszczuk Government had allocated $150 million towards the development of strategic electricity transmission infrastructure as part of the North Queensland Clean Energy Hub, subject to a feasibility study.

“The development of electricity transmission infrastructure in North Queensland will deliver investment and jobs from Cairns and the Tablelands, through the outback and down to Townsville.

"This is about securing additional energy supply to drive down energy costs for consumers.

“We encourage all companies with an interest in the North Queensland Clean Energy Hub to flag their potential involvement and provide us with the latest market information via the EOI process.”

Mr Pitt said Powerlink was conducting the EOI on behalf of the Queensland Government.

“Potential project proponents, including renewable generation and storage options, are encouraged to take this opportunity to have their project taken into account in the design of the transmission infrastructure and project timing.

“This is an important project which will drive cost savings by generating economies of scale through multiple generators and loads sharing transmission infrastructure rather than seeking individual network connections.”

“We know people in the North are really concerned about power prices. An important part in stabilising prices is making sure we invest in local, North Queensland infrastructure,” Mrs O’Rourke said.

The feasibility study into the North Queensland Clean Energy Hub is due to be completed and provided to government for consideration by December 2017. Insulator washing to maintain the network Pumped hydro project to take next step in consultation 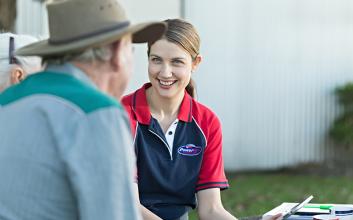